Yes, It Happens Here, Too: Human Trafficking in the U.S.

Yes, It Happens Here, Too: Human Trafficking in the U.S.

Slavery still exists in the United States in the form of human trafficking. Human trafficking involves forcing or coercing people to participate in unpaid labor, domestic servitude or prostitution. Victims endure horrific abuse, both physical and mental, and many do not make it out alive.

Human trafficking is a $32 billion-a-year industry; that’s larger than the illegal arms industry. (1)

Number of people who have been lured, forced or sold into sex trafficking in the U.S. (1)

Victims of human trafficking live an average of only seven years once they’ve been trafficked. (1)

Calls made in 2015 to human trafficking hotline by state (2)

Children are often targets for traffickers because they are easier to manipulate. People under 18 are also in higher demand in the sex trafficking industry.

Is human trafficking happening to someone you know? Here are some common signs of a trafficked individual. Warning signs to look for in a person include: (3)

Over the past two decades, some important legislation has been put in place to slow its growth and hopefully one day stop the human trafficking industry. (3)

The Trafficking Victims Protection Act of 2000

This act established the methods for investigating and prosecuting suspected human traffickers. This legislation also established the Interagency Task Force to Monitor and Combat Trafficking, which implements the laws put forth by the act.

The Prosecutorial Remedies and Other Tools to End the Exploitation of Children Today (PROTECT) Act established harsh, extensive penalties for U.S. citizens taking part in sex tourism, either within the U.S. or other countries. This act also created the Amber Alert system for lost or abducted children.

The National Defense Authorization Act of 2013

This act gave the U.S. government the right to terminate any contract with a country, agency or individual that engages in or supports human trafficking. 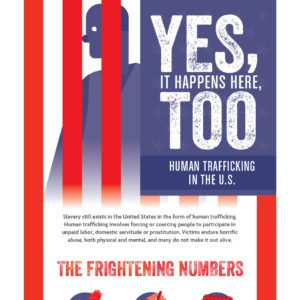