Tunnels
1979: the Eisenhower tunnel spans 1.7 miles through mountains west of Denver. At 11,000+ feet it is the highest point of the Interstate Highway System.[2]

Canals
1825: Erie Canal connects the great lakes to the Atlantic through NYC.[3]
1914: Panama Canal finished, cutting off 8,000 miles from the the NY to LA sea route.

Airports
1909: College Park Airport in Maryland is the oldest continually operating airport in the world. Founded by Wilbur Wright. [8]
Today: Over 640 million passengers and 19.6 billion pounds of shipped goods in 2013.[7]

But over time it’s failed to adapt.

Which costs a lot, personally, and nationally.

Nationally: Freight bottlenecks and congestion cost about $200 billion[9]
Or 1.6% of the U.S. GDP in losses each year.

Chicago is the nations largest railroad center.
Due to congestion, it currently takes a freight train longer to travel through Chicago’s city limits than it takes for a train to travel from Chicago to L.A.

Even though EVERY CENT of our GDP relies on infrastructure.

Rails–
15,000 miles of high speed rails worldwide[9]
Close to 0 of which are in the U.S.
=
less efficient highway and plane passenger travel

Beijing-Shanghai
819 miles/168 Mph/5 hours
America’s passenger trains are slower than they were 50 years ago.

…Without a plan to take care of existing roads…

210 million daily trips are taken across deficient bridges in our 102 largest cities.[10]
1/4 American Bridges are functionally obsolete, or structurally deficient.
Including 77% of Washington D.C.’s bridges falling into these categories.

Ports–
The U.S. has fallen to 22nd for quality of port infrastructure
And is losing traffic abroad.

Without a plan it’s only going to get worse.
Projected increase in travel and freight:[9]

Our personal safety, financial stability, and lifestyle depends on the health of our infrastructure. 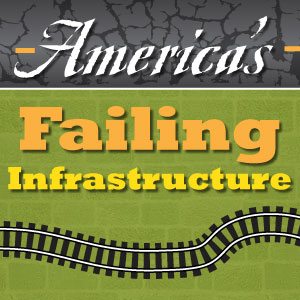