The Social Consequences of Mass Incarceration

The Social Consequences of Mass Incarceration

The United States has the largest prison population in the world, with more than 2 million Americans behind bars. Aside from the more than $80 billion a year it costs to maintain this gargantuan corrections system, the consequences it has for our society are staggering. (1, 2)

The U.S. vs the World

The number of prisoners incarcerated in the U.S. outnumbers even the most populous nations: (1, 3)

The Impact of Incarceration

Each instance of incarceration increases the likelihood of recidivism, undercutting the chances of rehabilitation: (4)

7,476,500 children have a parent who is incarcerated or under correctional supervision. (7)

The average state prison sentence is 12.5 years for fathers and 7.5 years for mothers.(7)

The average age of children with an incarcerated parent is 8, meaning that by the time most fathers are free, their children will have already become adults. (8)

Children who experience the incarceration of a parent are 2X as likely to be convicted of a criminal offense as adults, creating a cycle of loss. (7)

4.7 million felons — or 2.3 percent of the voting-age population — are disenfranchised. (9)

Laws denying felons the right to vote have altered the outcomes of two presidential elections and seven U.S. Senate races.(9)

Greater rates of incarceration do not correspond with reduced rates of crime: (10)

Between 1987 and 2007, state spending on corrections grew 6X faster than spending on higher education: (11)

Alternatives to incarceration programs, such as drug rehabilitation, can reduce recidivism rates by as much as 69% while lowering costs by $5,144 per offender. (12, 13) 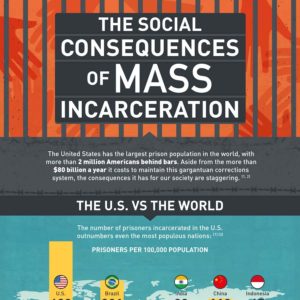